Matcha is a very powerful antioxidant

Antioxidants are responsible for neutralising the negative effects of free radicals: unpaired oxygen atoms that circulate in the body and attack healthy molecules contribute to the development of heart, eye, brain and skin diseases and most types of cancer. The formation of free radicals is accelerated e.g. by chronic stress, they also get into the body with fried or grilled foodstuffs and with contaminated air. Antioxidants eliminate free radicals, restore the balance of the body and support the immune system in a permanent way. Their impact makes us feel healthier, and aging processes are slowed down. Large amounts of antioxidants can be found in fresh fruit and vegetables, but matcha contains their highest concentration in the ORAC scale!

A rich source of catechins, EGCG – 10 cups in one bowl

Matcha tea is a rich source of catechins. It distinguishes itself from all other antioxidants by its specific properties in neutralising the activity of free radicals. Catechins reduce the risk of atherosclerosis, have an antibacterial and antiviral effect and reduce blood cholesterol levels. They play an important role in protecting the skin from harmful solar radiation. A derivative of catechin called EGCG, which is present in matcha, is a particularly strong antioxidant. This organic compound has strong anti-tumour activity and is an antioxidant 100 times stronger than vitamin C. Because we consume whole ground tea leaves, when drinking matcha, one cup of this tea is an equivalent of 10 cups of usual brew of green tea in terms of antioxidant content. 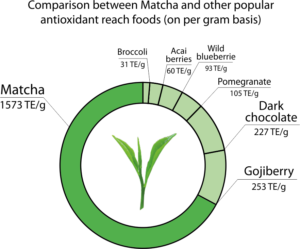 Journal of Agriculture and Food Chemistry, Lipophilic and Hydrophilic Antioxidant Capacitesof Common Foods in the US.

Matcha has been used by the Chinese Taoists and Japanese Zen Buddhist monks for over 1,000 years as a means of supporting the maintenance of peace and clarity of mind during the long hours of meditation. Today, we know that e.g. L-theanine, an amino acid concentrated in the leaves used to produce matchy, is responsible for these neuropsychiatric processes. L-theanine stimulates the emission of alpha waves in the brain, which affect our mood and evoke a feeling of relaxation and tranquillity, without causing drowsiness. L-theanine helps to induce the state of vigilant relaxation similar to the one achieved through meditation. A traditional powdered matcha has four times the content of L-theanine (39 mg per serving) as compared to green tea served in a bag.

Nutritionists recommend L-theanine also because of its beneficial effect on the maintenance of appropriate levels of dopamine and serotonin in the body – substances that are crucial for well-being, creativity and willingness to take on challenges. These two organic compounds play an essential role in numerous processes of the nervous system, such as sleep, motivational ability, the ability to experience pleasure. Serotonin acts as neuromediator, meaning a “messenger” of the body that transmits information between brain cells. Its appropriate level makes it possible to fall asleep and regulates blood pressure. A deficiency of serotonin leads to depressed mood, a large deficiency to depression. Dopamine is the main neurotransmitter from the group of catecholamines secreted in the human brain. According to recent studies, dopamine is the basis of motivational processes responsible for our willingness to act, learn and cognise.

Warlike samurais drank matcha before an expedition as a natural energising drink. Matcha contains high amounts of L-theanine and other nutrients that have a positive impact on the immune system. The level of energy after drinking a cup of matcha may persist over six hours. Despite the content of caffeine in matcha, there are no side effects after consumption thereof that are typical for the state after drinking coffee, such as hyperactivity, high pressure and nervousness. A sense of inflow of energy is more stable than in the case of stimulation of coffee because caffeine is distributed in the blood in regular doses. There is also no risk of sense of outflow of energy, which consumers of strong coffee complain about. 80 milligrams of caffeine in a cup matcha is an equivalent of 90-150 milligrams in a serving of coffee.

It helps to burn excessive calories

Matcha green tea accelerates the body’s metabolism, causing four times faster fat burning. Unlike many diets on the market, matcha, being a natural dietary supplement, does not cause any side effects such as increased heart rate or elevated blood pressure.

The high content of chlorophyll, a green pigment that gives the green colour to leaves, is contained in matcha and it cleanses the body of toxins. The amount of chlorophyll in the leaves increases as a result of a special production method involving shading of tea plants three weeks before harvest. Thanks to that the real matcha from Japan has a beautiful intense green colour.

The catechins contained in matcha tea not only help fight free radicals, but also have antibiotic properties and strengthen our immune system by means of its antibacterial and antiviral effect. One cup of tea provides significant amounts of vitamins A and C, potassium, calcium and iron to the body.

It reduces the level of bad cholesterol

According to research, people regularly drinking matcha have lower levels of bad LDL cholesterol and higher good HDL cholesterol. Men drinking matcha showed a 11% lower incidence of heart diseases than those who did not drink it (American Journal of Clinical Nutrition, 2011).