We owe the goodness of the green matcha tea primarily to the high content of two polyphenols, namely L-theanine and the EGCG catechin. Here you can find out how these substances effect our body. 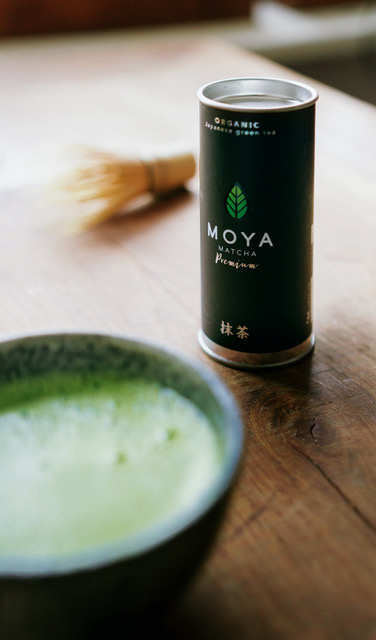 L-theanine is an amino acid that can be found in tea and mushrooms. Amino acids are chemical substances that constitute the building blocks of human body since they create proteins crucial for the production of insulin, adrenaline and neurotransmitters. They also support cellular regeneration and help gain muscle mass. As numerous American and Australian studies showed, L-theanine in conjunction with caffeine – both contained in matcha – positively affects cognitive functions, concentration and mood (1)(2). L-theanine partially soothes the stimulating effect of caffeine and lowers blood pressure. As a result, and what Newcastle University studies proved (3), drinking a cup of matcha makes us feel more energized, but also less nervous.

A research published in the American Journal of Clinical Nutrition shows how matcha tea improves attention and helps to concentrate on a task. People who within 1.5 h had drunk 2 or 3 cups of green tea achieved better results in the learning practice than consumers treated with a placebo drink (4). Thanks to its stimulating effect, green tea boosts creative thinking (5).

L-theanine positively affects memory, especially the working one. After drinking green tea, participants in the study carried out by the University of Basel solved some tasks designed to test hypothesis. Then professor Stefan Borgwart at the Psychiatric Clinic, who was leading the study, used the MRI to check the brain activity of the participants. He noticed that there was a modulation of the connectivity between the right superior parietal lobule and the middle frontal gyrus. The magnitude of green tea induced an increase in parieto-frontal connectivity that translated into task performance improvement (6). Therefore, it is assumed that green tea extract might be beneficial for the treatment of disorders such as dementia.

Two constituents – caffeine and L-theanine –  both present in matcha in perfect proportions, positively affect our cognitive performance. In 2017, some Dutch researchers assessed how the consumption of matcha and matcha-containing products influences our cognitive functions. Each participant had to consume one of the four test products: matcha tea, matcha tea bar (4 g matcha tea powder per item), placebo tea, or placebo bar. Then the participants performed a set of cognitive tests to assess their attention, data processing abilities, working memory, and episodic memory, by which we mean a person’s unique recall of a specific event. Research findings revealed that drinking matcha  improved basic attention abilities and psychomotor speed in response to stimuli (7). 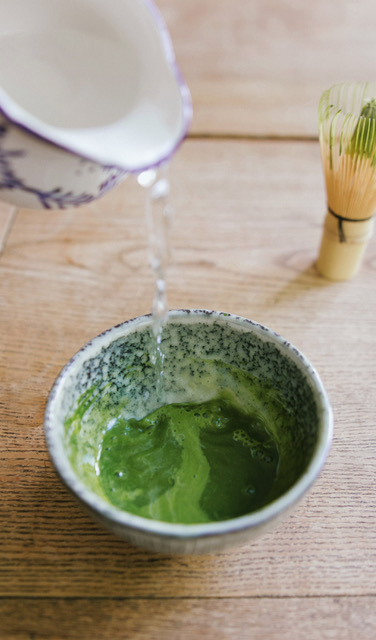 Catechins belong to the group of polyphenols. They are present in many dietary products: plants, fruits (e.g. apples, blueberries, gooseberries, grape seeds, kiwi, strawberries), red wine, beer, cacao liquor, chocolate, cocoa, plain green tea; but matcha is their richest source. Catheins fight bacteria, fungus and viruses. Therefore, they strengthen the immune system. They also remove heavy metals from the body and slow down the aging process. Tea catechins and polyphenols are effective scavengers of reactive oxygen species. Findings of the most recent studies demonstrate the connection between drinking green tea on a regular basis and the delay of tumor growth.

Some American scientists from the University of Colorado compared the concentration of EGCG in an infusion of the high quality Japanese matcha and that of the bag of Starbuck’s green tea. Findings indicate that the concentration of epigallocatechin gallate (EGCG)  in matcha was 137 times higher than in a bagged tea. Even high quality green tea contains three times less EGCG catheins than matcha (8).

Catheins are polyphenols that work as powerful antioxidants. They eliminate reactive oxygen species, including free radicals and peroxides. This is why matcha tea has a superoxidant effect that counteracts the abnormal activity of reactive oxygen species. The concentration of reactive oxygen species in cells is regulated by antioxidants, including free radical scavengers, glutathione, tocopherols and antioxidant enzymes. The imbalance between the oxidants and antioxidants causes an oxidative stress that may lead to cell damage or cell death High oxidative stress, with its damaging effect to the tissues, may probably cause neurodegenerative diseases like Parkinson or Alzheimer. It is also related to the occurrence of coronary artery disease. 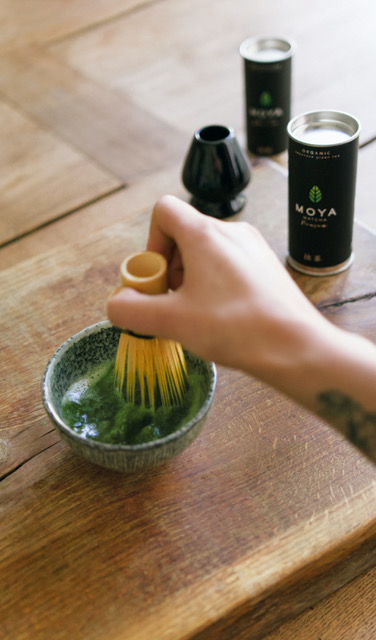 Matcha tea helps to burn the excess of calories and reduces blood glucose and insulin levels, even if we do not change our eating habits. The meta-analysis of the research findings published in the American Journal of Clinical Nutrition demonstrates that regular green tea consumption results in burning 100 extra calories daily (10). This is because the EGCG catechins increase energy expenditure and speed up fat burning. Other study showed that green tea consumers lost, on average, 1.3 kg during the twelve-week experiment, without changing their eating habits. According to another research, people drinking green tea on a regular basis have, on average, lower BMI and smaller waist circumference than non-users. Waist circumference is an important determinant of our state of health. Too much fat in there indicates metabolic abnormalities such as hypertension, hypercholesterolemia and diabetes.

A research conducted by the Sao Paolo University on a group of obese women demonstrated that enriching weight-loss programs with green tea brings the best results. Women who, apart from following the diet and continuing the workout, were drinking green tea for eight weeks, not only lost, on average, 5.8 kg but also decreased in waist circumference. Furthermore, they reduced the level of triglycerides and increased lean body mass and muscle strength (11). Scientists from the Penn State University made similar findings concerning catechins in green tea (12). It follows from a research conducted by The Royal Society of Chemistry that the effects of consuming regular green tea are multiplied when it comes to matcha. That is because whenever we drink a bowl of matcha we consume the whole powdered leaves, and therefore we assimilate a lot more nutrients and benefits than from a regular tea (both soluble and insoluble ingredients). The same experiment confirmed that matcha effectively lowers the level of low-density lipoprotein-cholesterol (LDL-C).

Green tea catechins (GTCs) proved to be effective in inhibiting cancer growth. One of the researches into this area showed that supplementing the diet with a daily dose of 600 mg of green tea catechins reduces prostate cancer growth. After 1 year only one tumour was diagnosed among the 30 GTCs-treated men (incidence, approximately 3%), whereas nine cancers were found among the 30 placebo-treated men (incidence, 30%) (14).

Researches also show that EGCG changes the cancer cell metabolism, since it suppresses the activation of the enzyme that is responsible for the cancer’s growth and activity (15). As underlined by one of the researchers – Wai-Nang Lee at the Los Angeles Biomedical Research Institute (LA BioMed) –  understanding how this anticancer attribute of green tea works may open the door to a completely innovative cancer treatment. A team of scientists from the Penn State University found out that the green tea EGCG catechin sometimes induces the oxidative stress in oral cancer cells, but it also exerts antioxidant effects in normal cells (16).

A population-based study of 75 000 middle-aged and older Chinese women showed that regular drinking green tea reduces risk of all digestive system cancers, including colorectal and stomach/esophageal cancers. As Vanderblit Epidemiology Center’s studies proved, women who consume 2–3 cups of green tea per day have a 21% reduced risk of digestive system cancers. Those who have consumed tea for 20 years have a 27-29% reduced risk of digestive system cancers, when compared with women who never drank tea regularly. All the women were non-smoking and non–alcohol-drinking, although there were some differences in their diet and lifestyle, and these factors were taken into consideration in data analysis. Findings were published in the American Journal of Clinical Nutrition (17). 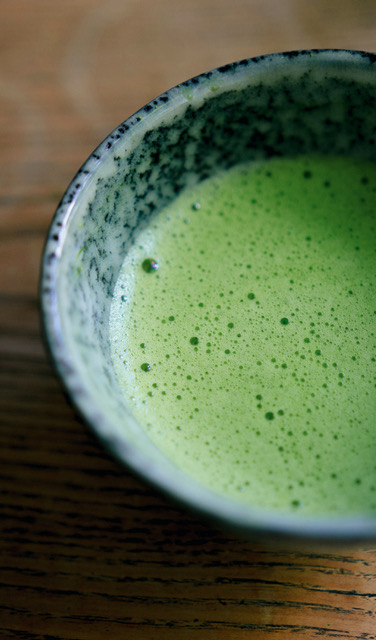 A Japanese population-based, prospective cohort study covering 40 000 middle-aged and 90 000older participants showed that EGCG catechins in matcha can bring benefits to the heart and the circulatory system. Studies published in the JAMA magazine (18) and in the Annals of Epidemiology (19) demonstrate that drinking green tea on a regular basis (i.e. few cups per day) reduces the risk of death by cardiovascular diseases. The higher the tea consumption, the lower the risk of death, especially among women. Green tea has proved to be a powerful agent in reducing the stroke risk.

Catechins, especially the strongest one – EGCG, have an anti-inflammatory and anti-clotting effect. Thirteen-year studies on over 80 000 Japanese showed that people who consume from one to four cups of green tea daily have a 20% reduced risk of stroke, when compared to people who do not drink green tea at all (20). „Regular green tea consumption improves circulatory system functions because it prevents clotting“ – says Yoshihiro Kokubo, the main author of the publication. He suspects that catechins play an important role in preventing strokes and other cardiovascular diseases.

Catechins, the main green tea component, by means of their anti-inflammatory and anti-clotting effects, may prevent a fatal disease – aortic aneurysm. Aneurysms are caused by atherosclerotic processes, hypertension and rapid physical efforts. Japanese research showed that EGCG catechins regenerate elastin, which is the main protein responsible for artery elasticity (21).

EGCG catechins in matcha green tea maintain bones in good condition and prevent osteoporosis among middle-aged and older people. One of the studies showed that drinking green tea on a regular basis is correlated with a 30% reduction of broken bone risk among women and men aged 50 and more. Participants of another study, which covered 150 postmenopausal women, consumed around 500 mg of tea extract, what translates into 1-2 cups of Japanese matcha tea. It resulted in improved bone health and higher density of the bone tissue that consequently caused  lowered tendency to inflammations and better muscle strength (22).